You have to accept All or at least the Functionality cookies to be able to use our website. Thank you!

It looks like a busy week, as there is a lot of economic data that is ready to hit the spotlight, together with the political news that are taking centre stage. Brexit negotiations are also in focus, together with the ongoing discussions around Italy’s deficit.

On Monday, the calendar is relatively quiet, apart from US retail sales figures that are set to come out before the US opening bell. The expectations here are that the figures for the core and headline could have increased. The headline number is expected to come out at +0.7%, which is well above the previous +0.1%. The core figure, which excludes automobiles, is forecasted to come out one tenth of percent higher, at +0.4%, against the previous month’s +0.3%. Certainly, better sales figures could have a positive effect on the US dollar, but we doubt that the greenback will show any strong reaction after numbers come out.

But there is one political event that could have its effect on the British pound, which is the meeting between the British and EU negotiators who will be meeting on Monday to discuss the Irish border issue between the Republic of Ireland and Northern Ireland. The Democratic Unionist Party (DUP) could vote against Theresa May if the British government breaks the DUP's red lines in Brexit talks. Both sides want to keep peace in Ireland by and will be aiming to find how to please both sides. If the talks won’t go ahead as smoothly as everyone would like to see them, then we could see the British pound being hit by sellers, who could shake up the currencies’ recent gains.

On Tuesday, during the Asian morning, New Zealand’s CPIs for Q3 are due to be released. Expectations are for the QoQ CPI rate to have risen to +0.7% from +0.4%, something that is likely to drive the YoY rate up to +1.7% from 1.5%. This would be well above the Bank’s own forecast for the quarter, which stands at 1.4%, and could raise speculation that the Bank could upgrade its inflation forecasts when it meets next. It could also raise some bets that officials may decide to bring somewhat forth the timing of when they expect interest rates to start rising. According to the August Monetary Policy Statement, interest rates are expected to start rising in September 2020.

During the European day, we get the UK employment data for August. Expectations are for the unemployment rate to have remained unchanged at its 43-year low of 4.0%, while average weekly earnings, both including and excluding bonuses, are anticipated to have risen at the same YoY rates as in July, +2.6% and +2.9% respectively.

According to the IHS Markit/REC Report on Jobs for the month, starting salaries for permanent placements rose at the second-sharpest pace in over three years. Temporary payment also increased strongly, but the rate of inflation was softer than the previous month. In our view, the strong increases in both permanent and temporary pay suggest that the risks surrounding earnings may be tilted to the upside, perhaps for a slight acceleration.

On Wednesday, during the European morning, we get the UK CPIs for September. Expectations are for both the headline and core CPI rates to have ticked to +2.6% YoY and +2.0% YoY, after rising to +2.7% and +2.1% the previous month. At its September policy meeting, the BoE kept rates unchanged at +0.75% and reiterated that an ongoing tightening of monetary policy over the forecast period would be appropriate, but any future rate increases are likely to be gradual and to a limited extend. In our view, the key takeaway from this decision is that the Bank’s plans remain more or less the same as in August. The Bank is probably done hiking for this year and even if inflation does not slow as the forecasts suggest, this is very unlikely to change. We believe that market participants will keep their gaze locked on Brexit developments, and specifically the EU summit on Thursday and Friday.

The Eurozone is also set to deliver their inflation numbers after the UK ones. The September core MoM and YoY CPIs are expected to come out in line with the previous ones, at +0.4% and +0.9% respectively. The headline YoY figure is also believed to be the same as previous +2.1%, whereas the MoM number could come out more than twice the last month’s number, at 0.5%.

The EU summit kicks off on Wednesday, where the European leaders are set to discuss a range of issues, as well as Italy and Britain. Certainly, in regards to Brexit, it is does not mean that a deal will be finalized during that summit, but the leaders are hoping it will help to progress further in the negotiations. Even though Italy is not really on the official agenda, still, it is believed that the Italian debt will be talked about. Current Italian debt is around 131 percent of its GDP, which is the second largest rate after Greece. The EU’s set debt target for that is 60 percent of GDP. Also, according to the EU Commission forecast, Italy’s deficit should be near 1.7% of GDP, but in the beginning of October, Italy came out saying that the forecast is at 2.4% for 2019 GDP. This sparked anger in Brussels to which they said that Italy is not sticking to its promises delivered by the previous government, which said that the deficit could only be near the 0.9% of 2019 GDP.

In the US, we get the minutes from the latest FOMC meeting. At that meeting, the Committee raised interest rates to the 2.00-2.25% range and removed the part describing monetary policy as accommodative, which was interpreted as dovish by the market initially. However, at the press conference following the decision, Fed Chair Powell said that said that dropping the “accommodative” part does not signal a policy outlook change, but just that policy is proceeding in line with expectations. In the Q&A session, he added that the Fed funds rate is still below the neutral estimate of every Committee member, and that they plan to keep their future decisions data driven, instead of trying to figure out where precisely the neutral level of interest rates is. 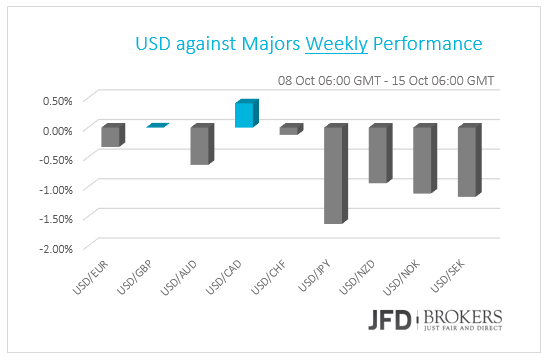 Given that we also got updated economic forecasts and the updated “dot plot”, which continues to suggest another rate increase in December and three more in 2019, we think that there is not much new information to get from the minutes. That said, we will scan the minutes to see whether the rest of the Committee, or at least a majority, indeed agrees with Powell that future decisions will be data driven, something that could increase speculation that rates could rise beyond neutral if data continue to come in on the strong side. On the other hand, anything suggesting that several members prefer to pause for a while as soon as rates reach their neutral level, could encourage some investors to scale back their bets of too aggressive hikes by the Fed.

Friday will be a big day in terms data releases, as during the Asian morning we will get the Chinese GDP figures, together with the industrial production and the unemployment numbers. In regards to the GDP, everyone will be on the lookout for possible signs of weakness, given the fact that the country is trying to battle the US trade wars right now. Both, QoQ and YoY GDP figures are forecasted to have declined slightly. The QoQ is expected to have gone down from +1.8% to +1.6% and the YoY, from +6.7% to 6.6%. With the continued US tariffs on Chinese exports, China is still managing to fight back to keep holding afloat. But everyone is still guessing, how far can all this go? The industrial production is believed to have slowed down a tick, from +6.1% to +6.0%. As for the unemployment rate, for now, there are no forecast. But the previous number was at 5.0%.

Later on in the day, Canadian CPIs will take the spotlight. The core and the headline YoY numbers are forecasted to come out at +1.8% and +2.7% (respectively) for the month of September. This is a tenth of a percent higher than the previous on the core figure, but a tenth lower on the headline. Nevertheless, both are still in line with Bank of Canada’s target range of 1-3 percent. At the same time, Canada will release their MoM retails sales numbers that are expected to have gone up from the previous +0.3% to +0.5% for the month of August. Still, this would be a low number, comparing it to the highest that we saw this year for the month of May, which came out at +2.2%.

The content we produce does not constitute investment advice or investment recommendation (should not be considered as such) and does not in any way constitute an invitation to acquire any financial instrument or product. JFD Brokers, its affiliates, agents, directors, officers or employees are not liable for any damages that may be caused by individual comments or statements by JFD Brokers analysts and assumes no liability with respect to the completeness and correctness of the content presented. The investor is solely responsible for the risk of his investment decisions. Accordingly, you should seek, if you consider appropriate, relevant independent professional advice on the investment considered. The analyzes and comments presented do not include any consideration of your personal investment objectives, financial circumstances or needs. The content has not been prepared in accordance with the legal requirements for financial analyzes and must therefore be viewed by the reader as marketing information. JFD Brokers prohibits the duplication or publication without explicit approval.

CFDs are complex instruments and come with a high risk of losing money rapidly due to leverage. 75% of retail investor accounts lose money when trading CFDs with the Company. You should consider whether you understand how CFDs work and whether you can afford to take the high risk of losing your money. Please read the full Risk Disclosure.